What’s in a meme? Richard Dawkins first coined the word meme in a footnote to 1976’s The Selfish Gene. He suggested the idea as a way of understanding ideas according to evolutionary principles.

Dawkins identified three elements that make a meme successful.
– Longevity – how long does a meme last
– Fecundity – how many copies of itself does it generate
– Fidelity – how faithful are those copies to the original

There is some disagreement on what the word currently means. Are brand logos memes? Are YouTube videos? Increasingly, usage of the word indicates that what distinguishes a meme from other viral content is that it has been changed in some way. A meme is always viral but what is viral is not always a meme.

Are these icons memes?

Interestingly, this goes against one of Dawkins’s original principles – fidelity. But it suggests that Dawkins may have missed an element that is essential to the survival of a meme: adaptability. (This is a quality familiar to evolutionary science, of course, but since it generally applies to the organism rather than the gene, perhaps this is why Dawkins chose not to mention it.)

That copy-fidelity is less important than adaptability can be seen by the huge number of variations of the same meme, and the dominance, for a while, of particular meme-templates, Condescending Wonka, for instance, or Success Kid. It is also evident in meme sites like memegenerator or the endless tired variations on Keep Calm and Carry On, which even has its own keepcalm-o-matic site.

But the adaptability of the word meme itself means that it can be applied not just to funny cat pictures (even if that is what the internet was originally invented for). Memes have a way of plugging into the popular imagination, which should prove a powerful tool, not just in advertising – as in Virgin’s use of Success Kid – but also in developing narratives for social change. 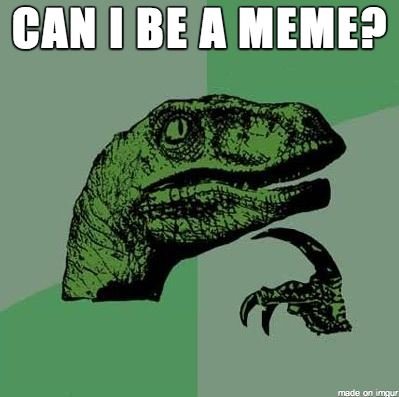 Hover over the image to discover more memes.

The advantage of using memes this way is that it has the potential to harness public sentiment and to develop real grass-roots campaigns, as CSS, the Center for Story-based Strategy attempts to do.

Certainly it is one of the distinctive strengths of social media, that they can mobilize large but disparate groups.

However, memes are hard to control. The Casually Pepper-spraying Cop meme became a symbol for the Occupy movement almost spontaneously, but attempts to force a meme can end up backfiring, as when a right-wing group in America tried to co-opt a woman’s image for a political campaign. Again in the US presidential election of 2012, although President Obama benefitted from the Big Bird and Binders full of women memes, his campaign’s efforts to force the Romnesia meme failed.

And it’s the endless variability that makes memes so tricky to pin down. The meaning of the word itself is evolving in different directions. You can argue back and forth about what is and isn’t a meme, which may go to show that if the word itself lacks the fidelity that Dawkins mentions, it still has the longevity, fecundity, and variability to make it a true meme.